It’s been a fact of life for awhile, I’m not that into games. All the apps my friends and kids have on their phones, leave me cold.  So, how did I end up obsessed by PokemonGo!  Well..it all started with the news. One night I was watching the news (Youtube – Jimmy Fallon) and heard that a major highway was shut down while hordes of people were out hunting “rare” Pokemons. I actually sat up, put down my wine glass and took notice.

I may be a gaming neophyte but 10 MILLION people signed up for Pokemon Go in the space of 8 days, and Australia was one of the first countries where it was released (what the!).  Obviously, this wasn’t just a phenomenon of the whatev! generation, there were people my age (an ageless 35 I like to think of myself) scrambling around the city having fun.

I had to check it out. Download from the app store was easy peasy. Registering to play, well that was a different story. The server was so overloaded that it wouldn’t let me in!  My kids thought this was hilarious, of course – they got in early.  Mum was the only one unable to download it. Well, their teenage taunts made me more determined, and so a mere 24 hours later (and an upgrade to my mobile plan) I was in.

Then a funny thing happened. Rather than me playing my game on my phone, alone –  my kids and I decided to go to the park…TOGETHER.  I know, outrageous, right? What teenage kid volunteers to hang out with their mom, evah? But as a family outing, it ranks right up there with the best. We walked around together, chatted about where to go next, who we captured, how to keep them from escaping and figured out the game together (spoiler alert…there are no tips in this blog, we still don’t know sh*t).

But it didn’t matter, gone was the bickering between siblings, the monosyllabic answers from my teens and the constant refrain, “can we go home now”. It was the first time we had more fun at the park than the dog did. Little tip – don’t take the dog, we kept forgetting about her.

And the fun didn’t stop there, I now had volunteers to run errands with me. Who wants to go grocery shopping, “Take me, mum”! Who wants to go to the chemist, “I’ll go, mum”. We took long detours through the neighbourhood, looked for Pokestops, captured Pokemon and debated who was the most obsessed with the game.

Even on the last day of school holidays, Pokemon came to the rescue. After fruitlessly trying to work while my kids and their friends spent the last bit of school holidays blasting music, playing the world’s loudest ball game (still not sure what it was but it was deafening) and annoying each other, a bolt of inspiration hit.  I offered to take all the kids to a local but unexplored park to hunt Pokemon. They returned, after a blissfully silent 2 hours, happy and triumphant. They hatched eggs (don’t ask), captured an elusive Clefairy (ditto) and battled at a local gym (I’m too scared to try that yet).

The only downside? I forgot to ask them to take my phone with them. Damn, now I need to catch up!  As far as apps go, this one is a winner and I highly recommend it. This might be the first game I keep on my phone :). 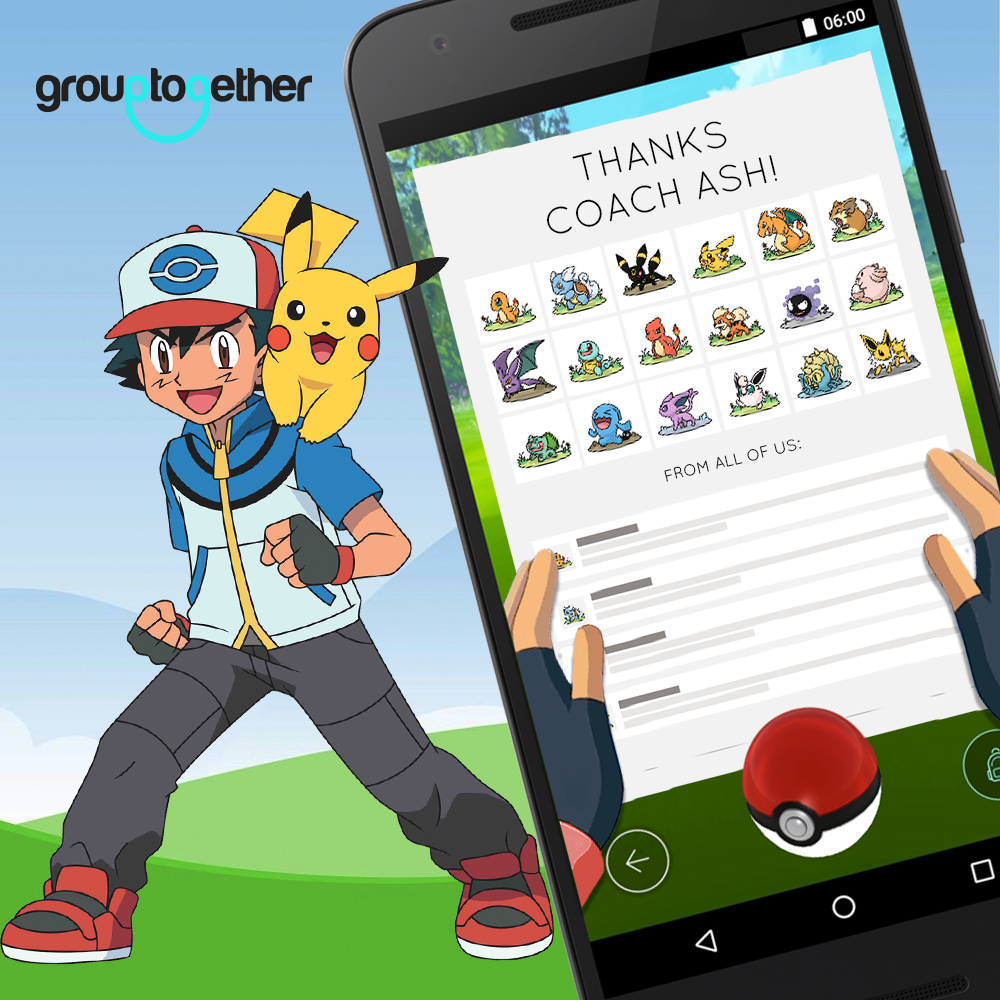 So obsessed, I had our designer create a Pokemon GroupCard. Whaddya think?

To all of you other Pokemon tragics, we ROCK! And so, from me to you – all Pokemon themed group gift collections are FEE FREE through September. For more information, contact Julie at help@grouptogether.com, or click here to learn more and get started.

Flying with the greatest of ease.

Flying with the greatest of ease, on that scary trapeze!
It was an insane way to start off the New Year.  Crazy but fun, we hoped, as we schlepped our family to

By Ali Linz, Co-Founder of GroupTogether and Mum to 4 kids

Another mum and I helped 40,000 parents organise group